It's been two magnificent years in Medford, but now that time is over.

While this blog will remain online, I won't be making any new posts here. It's time for Tucson and my Arizona Adventures. You can follow them starting now at bryanintucson.blogspot.com

Thank you for following and supporting, I hope it continues on in Arizona.
I end this blog with my final words to my coworkers at NewsWatch 12.

I've been using the term "heavy heart" to describe how I feel about leaving KDRV. Right now, I don't feel as excited as I should about my next step and next adventure, becuase of all the people I will be leaving behind. I cannot thank you enough for making my first job as excellent as it was. I loved reporting and living here, and doing it alongside you all.

I am proud to say that I worked at this station. My skills were improved and I worked with quality news people, and quality friends. Because I was comfortable outside of work, I could thrive at work.

There's one mantra that I tried to apply everyday here-- "If everyone feels like they're working a little bit harder than they should, then that's when everything is clicking just right."
Keep pushing, keep trusting your newsteam-mates are doing the same. 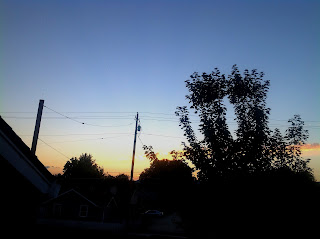 I woke up well before my alarm sounded this morning. On my last day working at KDRV I want to be able to soak in everything that I can. One more day enjoying the people, the city, and the station.

I've been mulling this day (and the rest of this weekend, actually) just about non-stop for the past week, and I'm not entirely sure I'm totally prepared for it.

But as one of my favorite songs says, "Inhale, breathe steady, exhale; like you're ready if you're ready or not."
Posted by Bryan Navarro at 6:30 AM No comments:

Everyday is peppered with victories; Some are small, some are big.

Yesterday I had a fantastic story with some of the best video I've ever shot. A car was spotted 100 feet down an embankment and the driver had been stranded with it for three days. Sunday morning he was driving on a Forest Service road when he took a turn too fast and rolled his car. For three days with little or no food and water, he survived. Wednesday, he heard a car and called for help.

Severely dehydrated, he was strapped to a backboard and carried uphill to the ambulance and flown away. I was there for the story.

When the rescue became my story, I had still yet to eat anything all day. I contemplated stopping to get food to eat on the 90 minute drive to the scene. I didn't get food and it paid off. If I was three minutes later, I would have missed the patient being hauled up. Small Victory.

After interviewing the rescuers, I asked if there was a quicker way down to the valley. He mentioned some roads I had never heard of before. I didn't know where they were, but I chanced it. After ten miles through beautiful forestland, the gravel road became wider; then crossed a bridge; then another bridge, paved; then mailboxes popped up; power lines overhead; finally, homes lined the street. I saved at least 20 minutes driving back, an eternity in TV time. Small Victory.

Got a great story that reminded me why the lunchless, gray-hair-sprouting days are worth it. Big Victory.
Posted by Bryan Navarro at 8:28 AM No comments:

Thank you so much for the kind messages. I'm very excited about everything that'll be coming my way in the next year!

My last day on the job in Medford is next Friday, the 27th. Friends are helping me pack a U-Haul and I'll hit the road early Monday morning, picking up Dad (and maybe Mom) in Oakley. We hope to cruise into Tucson on Tuesday. I'll have time to apartment hunt and get settled before starting work at KOLD on Monday, August 13th.

I've been job hunting for about two months (which is a really short time in the TV world) and was being selective about where I was looking. There were three criteria I searched for: Job, City, Station.

The job is a bit different, I'll be working a much earlier shift: 3:30a-11:30a. And I'll be doing a lot more live shots in the field, especially for breaking news. Sometimes I'll have a cameraman, sometimes it will be just me. So my ad-libbing and multi-tasking will be tested and improved.

Why Tucson? It's more than just a step up in the rat race of the television industry. I didn't want to move across the country, or somewhere that gets feet of snow each winter. I'm still relatively close to home, in a city that I've heard good things about. In fact, Tucson was my number two choice of where to live, where I could reasonably get a job (#1 was Austin, TX).

I also wanted to work for a good station. There are some places where they don't care about the quality of the work as much, or there's no team atmosphere. KOLD is not one of them. When Congresswoman Gabby Giffords was shot in January 2011, KOLD was the only station that didn't jump the gun and report her as dead. Today, people still priase the station for their accuracy. And that's one of the reasons I want to join.

My blog (bryaninmedford.blogspot.com) will have updates for the next few weeks, but I'll probably start a new one for my new adventures.

I'm very much excited for this new experience, but sad to leave Medford. It's a beautiful place, I've made great friends, and have grown comfortable in my job. But it's also tough to move further from home. Before, I was a 6-hour drive from Oakley. I could come down for a weekend trip if I wanted. It will be a bit more difficult from Arizona. I miss seeing you already, and it'll be tougher now.
Thank you for sending your love over the past few days, and over the past two years as I've been away from home.

Thank you for being so understanding and so supportive.
Posted by Bryan Navarro at 10:48 PM No comments:

I'm excited to officially announce that I'll be moving on from the mountains and valleys of Medford, Oregon, to the shadeless desert of Tucson, Arizona.


I'm proud and honored to be joining the newsteam at KOLD, the CBS affiliate in Tucson, as a morning reporter.


Two years have flown by here in Medford, and now I'm excited for this new challenge and adventure.


I've got lots to share in the next few weeks, but I'll also be packing and soaking up my last few days with my friends. Stay tuned for updates about "contract years," why I think market size is overemphasized, a look back, and a look ahead.


Thanks.
Posted by Bryan Navarro at 12:42 AM No comments:

Two years ago was my first day at KDRV-TV. Time flies when you're having fun, and it's flown by.

From newbie to one of the more experienced reporters.
From getting stress stomachaches to feeling self-assured even when deadlines loom.
From using Mapquest everyday to giving directions from memory.

I've been lucky to explore the world outside of Medford, too. Cliffjumping into Crater Lake, soaking up the Oregon Coast, skiing Mt. Shasta and Mt. Ashland, climbing Mt. McLoughlin, jetboating the Rogue River, hiking a half dozen trails, spelunking the Oregon Caves, swimming in Emigrant Lake. Being only six hours from home has been great. I've been incredibly lucky to be home for both Christmas celebrations, two college friends' weddings, three Giants games, one Saint Mary's graduation, and several weekend trips to be with family.

I've said hello to many new friends and goodbye to even more. I've deeply missed college and high school a lot, then learned to love the present with that vigor.

There has probably been more change in the past two years than any other two years of my life. It's been scary, fun, humbling, and empowering.

What's on tap for the next two years? Great question. Next question.
I don't even know what my life will be like in two months. But these two years have taught me to embrace that unknown, to parlay it into something I can be proud of.

Earlier, I said just about everything has changed. At least one part of my life has not.

I still hate shaving everyday.
Posted by Bryan Navarro at 11:59 AM 1 comment:

It's been more than a month since my last writing here. Don't mean to leave you hanging, but it's been a busy and fun month.

There was a trip to SF with friends, a 5-day weekend, a weeklong vacation, seeing Romeo and Juliet, lots of poolside tanning, and some other funsies.

In other words, I've been trying to get out and stay busy now that it's summer. This blog has fallen as an unintended victim.

Here's a look at some of my stories from last week.
Monday: Arizona Immigration Law Reaction
Tuesday:
Lookout Move-In from Bryan Navarro on Vimeo.

And as a bonus, here's last Friday. Mountain Bike Race in Ashland.
Posted by Bryan Navarro at 8:48 AM No comments: 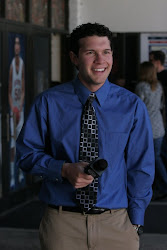